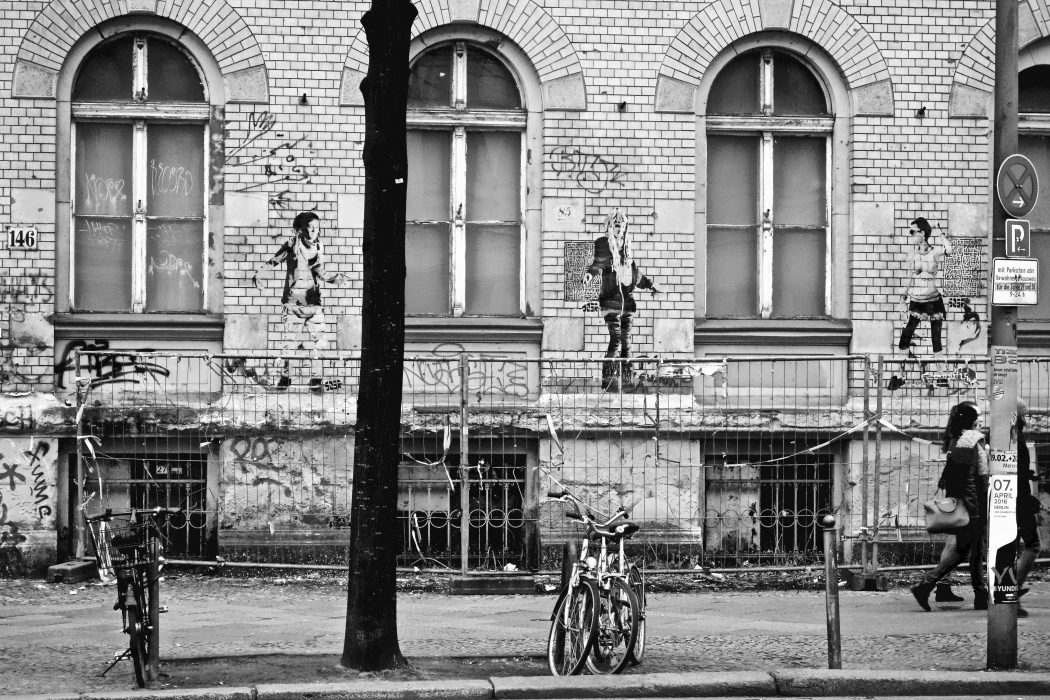 I am an inexperienced cyclist. As far as possible, I avoid Berlin’s main arteries and stick to the backstreets. Bike lanes constricted by car traffic, tram tracks and intrusion from roadworks and heavy construction make me nervous, so my routes are often haphazard interconnections of empty footpaths, public and corporate plätze, service alleys, old river wharves, canal towpaths, open-ended altbauten courtyards and gravelled paths through neighbourhood parks. Such journeys, shaped by inadvertent opportunity and a willingness to get lost, are difficult to map but over the past few months, they’ve taken me to some of the city’s more arcane, imaginative recesses.

The topography of Berlin is pitted, scraped and always under repair. Thoroughfares are obstructed by thermo-plastic barriers, corrugated tin and plywood boardwalks, and wire fencing; multi-story refurbishments are masked by scaffolding and canvas. Then there are these voids – rubbled lots, hollowed-out structures, abandoned excavations, remnant concrete slabs – that the Mexican writer, Valeria Luiselli, refers to in Sidewalks, her compact collection of essays, as relingos. For Luiselli, a relingo “is an ambiguous space, a piece of waste ground without defined borders or limiting fences, a species of plot on the margins of metropolitan life, even if it is physically to be found in the very center of a city…” In Berlin, relingos are everywhere but these “urban absences” (Luiselli again) are not always by-products of careless real estate development, inconvenient off-cuts of speculative metropolitan subdivisions. They can be scar-tissue – of horrific mid-20th military destruction, of forced ideological segregation – unwanted fragments of no man’s lands. They can be reminders of pasts still too close for comfort.

If my bike journeys in the city are shaped by anything, it’s curiosity about these spaces. On one of my first long rides across the city, north to the Turkish working class neighbourhood of Wedding along Gartenstrasse – past the walled Park am Nordbahnhof, itself a reclaimed relingo at the edge of what was once a death zone on the East Berlin side of the Wall – to a towpath along the cambered, fin-de-siècle bricked banks of the Panke, a thin tributary of the Spree River, I noticed disused, neglected spaces wedged into nearly every block. But it wasn’t until I ventured south-east, across the Spree itself, to Köpenicker Strasse, along the boundary between Friedrichshain and Kreuzberg, that I saw similar spaces co-opted as squatted encampments, vegetable gardens, makeshift markets, and open-air craft workshops, sharing street access with metal pipe and plastics factories and grimy post-war warehouses repurposed as artists’ ateliers, photography studios and industrial-chic offices for tech’ start-ups.

Let’s face it, the Sisyphean challenge facing every German artist under 50, whatever their medium, is to cut through the murk of their 20th century history.

In Berlin’s east, relingos are fertile territory for experimentation: fluid, immersive social alternatives, re-construed and resurfaced as resistance against a future being shaped elsewhere in the city by a newly acquired enthusiasm for capitalism. Whole blocks of erasure – or disused buildings, several stories high – have been abstracted with swathes of aerated acrylic, monochrome paste-ups, oversized sculpture, and improvisatory architecture and landscaping, to suggest a more thoughtful, human approach to urban occupation than the callous, antiseptic redevelopment the city’s planners probably have in mind.

An acquaintance of mine, Matthias Gephart, a.k.a. Disturbanity, has appropriated several of these spaces for large-scale artworks that, in a few cases, are as recognisable – and as elemental to the persona of the city – as der Berliner Fernsehturm, Berlin’s television tower, the bulbous, phallic hold-over from a ‘60s, Jetson-like Soviet vision of a space-age future. The experience of these works, in situ, can be unsettling: some infect rather than impose, hinting at toxic, viral, post-industrial decay, but others might be read as arcane cryptography, feral clues to secret escape routes, maybe, like the tunnels once dug under Berlin’s infamous wall, ways out if what passes for modern civilisation suddenly goes tits up.

The improvised ubiquity of Berlin’s street art is sometimes used as an argument against its relevance and value – and against Berlin’s insistent claim to be taken seriously as an art city. But its practitioners are very serious, exploring themes that echo those of older, more venerated, post-war German artists – Anselm Kiefer and Gerhard Richter come to mind – in whose works the jagged national traumas of Nazism, followed by the totalitarian Communist re-configuring of East Germany, still reverberate. There’s also a sardonic humour, a stiff, paint-stippled middle finger jabbing the rectum of a too-formal German art and design establishment. But there’s no ignoring the simmering rage – dark, unspecific, frustrated – because, let’s face it, the Sisyphean challenge facing every German artist under 50, whatever their medium, is to cut through the murk of their 20th century history and gain not just some clarity but maybe even that ugliest and most dangerous of German ideals, purity, and so be able to see another way ahead.

Then again, given the weight of more recent history, maybe the way just isn’t there. In which case, a darker interpretation of what I’ve come across in Berlin’s relingos, contradicting the inherent optimism of Germany’s youthful popular culture, might make even more sense.

‘A New Map of Berlin’ is a series of dispatches by C.C O’Hanlon, in words and photographs, from his exploration of the city on a bike.

Creed O’Hanlon is a traveler, diarist and avid cycleur. His writing has been published in The New York Times, The Bulletin, and Griffith Review, and included in Best Australian Stories 2004 and Best Australian Essays 2005 (publ. by Black Inc.), as well as the anthology A Revealed Life: Australian Writers And Their Journeys In Memoir (publ. ABC Books).